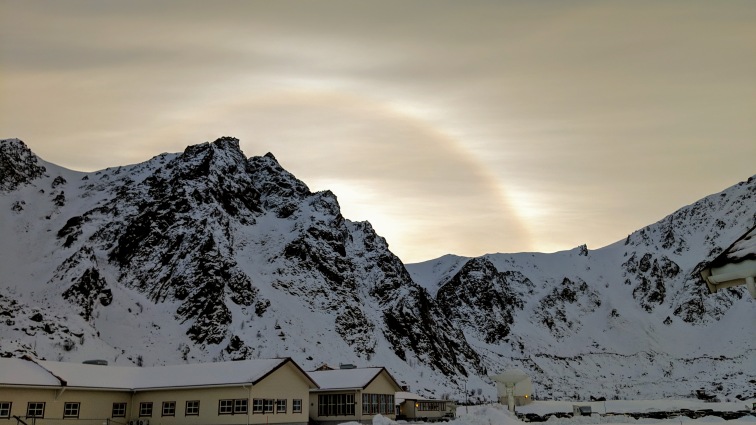 “Gotta tell me something now, dawg. What the f…! Why you went and did that?!”

The question was met with silence from the passenger seat. The figure crouching to the far side of the car did not listen, but stared out of the car window at the passing landscape with glassy eyes.

“Now we gotta drive a hundred miles `cause you too stoopid to—”
“What’s that!?”
“Yeah, you heard me, dawg. Jus’ called you stoopid. `Cause you stoopid!”
“I know what you think of me.”

The figure straightened up and pointed out of the window.

“I mean, what’s that there?”
“What?!”
“There, around the Sun. Don’t you see it? There’s a halo around the Sun. I think it’s got some weird spots on it, that halo. Can’t see straight, though. Does it?”
“No. Ain’t seein’ it. For f… sake, dawg. What the h… you think you was doin’ with them knitting pins in the barn?”
“I…”
“Look at us! Now we in that d… car on a d… Saturday, drivin’ you dingbat to the d… hospital! Could be watchin’ the Titans by now.”
“You could be watching the Titans. You could also tell me if those spots are there or not.”
“Shut up, will you? Be happy I drive you to that d… hospital!”

For a while, the two were, in fact, quiet.

“You know, stuff like that happens when sunlight interacts with ice crystals in the air. Imagine how light these crystals have to be in order to be suspended in the air.”
“Shut up!”
“Come now. I wish I saw better than this. Surely, those spots on the halo must be there.”
“Your own fault, dawg.”
“I mean, how awesome would it be if I was right? If that is what I think it is, you got no excuse but to like it…”

The figure on the passenger seat went on to talk more about halos about little ice crystals suspended in the air, about their reflective properties and the mere fact, that they were there floating like small Persian magic carpets, right in the Sun’s path, to make a beautiful sight for those with their eyes open to see them. Now, if only he could see properly. Were there sun dogs or not?

“Alright, now, are there sun dogs, too?” he asked.
“If it’ll shut you up! the other one grunted, squinting upwards. Dunno. Can’t see properly.”

The driver leant over to the passenger’s side until…

They left the car. The driver looked up.